Our camping trip in British Columbia, Canada, including a drop down to Yellowstone National Park.

Our sleeping bags were so toasty but the sounds of the dawn were coaxing us out into the chilly morning; there was that viewing platform after all and we might be missing out. We envied those already there holding steaming cups of coffee, but there was no going back now as they excitedly pointed out the bear. Sure enough, there in the distance, our binoculars zoomed the tiny black speck into a full-sized brown bear waddling along in our direction.  But first, he waded into the icy blue waters to catch himself a fish which he savoured right there in the middle of the river before emerging again and continuing in our direction. He disappeared into the thicket but re-emerged just as we turned back to put that pot on to boil. If those holding their steaming cups had not called us back, we would have missed a sighting, so close, we could hardly believe our good fortune.
We heard later that this was a rare sighting. Little did we know at the time just how lucky we were! 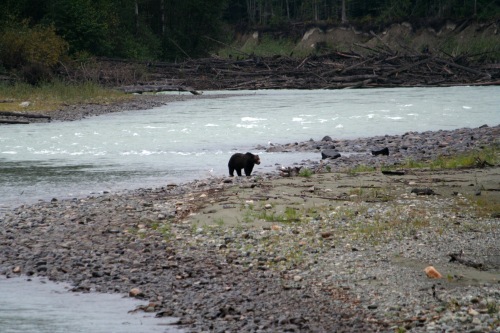 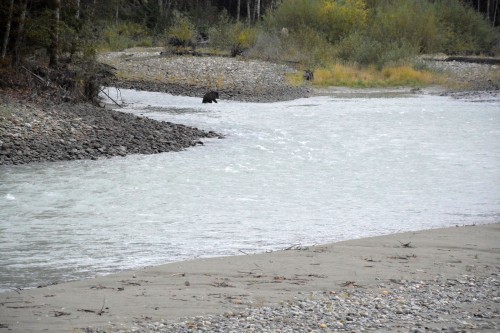 Is it a brown bear or a grizzly? The answer is that all grizzlies are brown bears, but not all brown bears are grizzlies. The grizzly is a North American subspecies of brown bear with the Latin name Ursus arctos horribilis. The correct scientific name for a grizzly is “brown bear,” but only coastal bears in Alaska and Canada are generally referred to as such, while inland and Arctic bears and those found in the lower 48 States are called grizzly bears.
~ taken from http://www.pbs.org/wnet/nature/bears-of-the-last-frontier-brown-bear-fact-sheet/6522/

We had a bit of time to kill before meeting the rest of the group for our float down the river, so we dropped in at Snootli Regional Park for a short ramble through the forest. It was magical for us, coming from a dry country; a fairy tale coming to life, our very first taste of trees stretching to the heavens, dripping in moss.

The Big Cedars Trail in the park is home to an ancient cedar grove. The First Nations people used this area, for which respect needs to be shown, to harvest bark and wood from these sacred trees. The scars left, after planks were cut away from the living tree, are clearly visible here. The weather is not that of a sunny South Africa; in fact we are not even sure if our float down the river will go ahead… but we are not disappointed, rain most definitely does not deter a single thing down here.
This is a gift from my daughter and her husband for my birthday and I am beside myself with excitement! We have a booking with Kynoch Adventure Tours and arrive at the Bella Coola Mountain Lodge 15min prior to departure, to sign the waivers.

While we wait for our guide, we step out into a brief splash of sunshine to meet the other two couples joining us on the float. They are Canadians from Calgary and they are on a road trip across British Columbia.
Time to pile into the van. En route to the boat launch, our guide stops to point out a strange sight among the cattle, but it is nowhere to be seen… another time maybe.
Life jackets on, rules of the river explained, we take our seats and push out into the adventure, not without trepidation… we are hoping to bump into bears, brown bears and black bears! Up ahead there is a platform on which lenses of extraordinary lengths are propped up on tripods… waiting. Apparently, they can wait in vain for days.

We are still heading out into the river when suddenly our guide leaps out of the rubber ducky and drags the boat back. Out of the corner of his eye, he has spotted movement, and there before our very eyes, just a hop away, a brown bear emerges looking altogether just like a giant teddy bear. 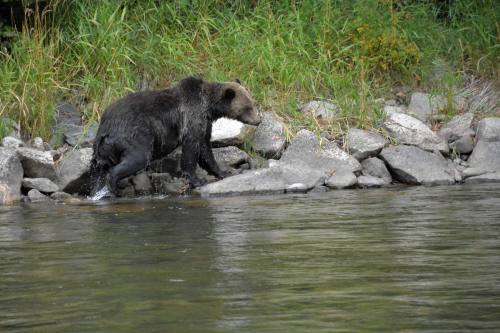 We have the back seats so I notice when our guide looks back suddenly – he had noticed, he says, that our brown bear had spotted something behind us, and sure enough, a black bear had come down to drink. Sadly though, in a flash, he dashed back for cover. Black bears are shy and do not hang around brown bears. I was very lucky to have spotted that one too.

Black bears can be black, blue-black, dark brown, brown, cinnamon and even white. Grizzlies, likewise, may range in colour, from black to blond. Although grizzly bears are, on average, significantly larger than black bears, size is not a good indicator of which species is which.

The best indicators are the size of the shoulders, the profile of the face and the length of the claws. The grizzly bear has a pronounced shoulder hump, which the black bear lacks. It also has a concave or “dished” facial profile, smaller ears and much larger claws than the black bear. Black bears have a flatter, “Roman-nose” profile, larger ears, no visible shoulder hump and smaller claws.

When our very knowledgeable guide, who has been in the family business forever, decides to leave our brown bear in peace, we float on down. The cameras cheer and show thumbs up.

The waters ripple with salmon; the edges littered with those that have spawned and died.  Even though it proves to be quite a slippery affair to land a fresh bite, only once the run has come to an end, will the bears settle for rotting flesh.

It rains softly off and on; the nooks and crannies that usually yield bears are dismally quiet… we console ourselves with the thought that we could easily have seen nothing at all on this trip… when all of a sudden, there they are, mother and baby, frolicking with fish. Bears are solitary (this I did not know) and one only really sees groups, small groups at that, when a mother with her one or two (rarely 3) babies, passes by. 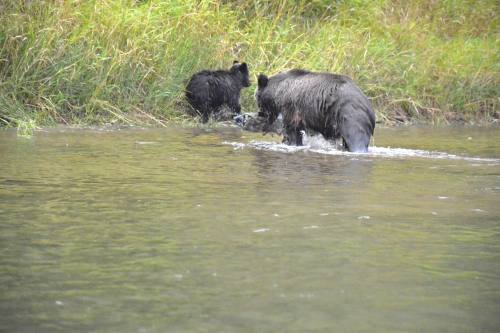 They disappear into the long grass to enjoy lunch.

WHAT a treat!! Thank you for a very, very special birthday present!